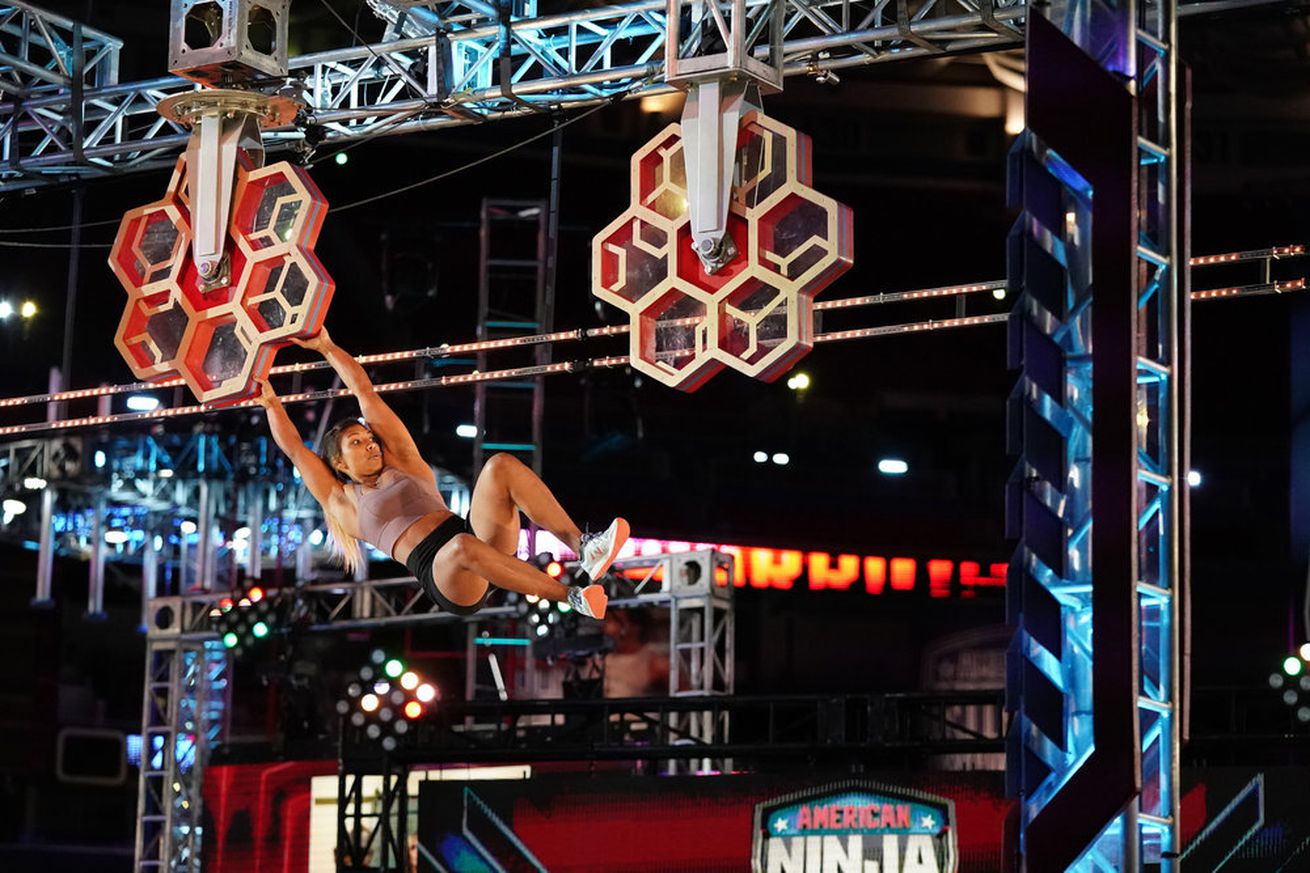 It wasn’t perfect, but Meagan still had a lot to celebrate and she will return for the Semi-Finals.

We’ll just say it: Meagan Martin is American Ninja Warrior royalty. Her runs have the ability to inspire new, young competitors every time she approaches the course.

Meagan is also well aware of what it takes to make it on the course and the show. She’s had stellar seasons, set records, and gone home early. In season 11, she was unable to make the National Finals. That might actually have been a blessing since she needed time to fully rehab an injury.

Back for season 12, Meagan was testing the waters. She was coming off rehabilitation, as well as quarantine, which had changed her training tactics. On the course, she looked good, steady and strong through the obstacles. It was one tiny error on the fifth obstacle, Sideways, that ended her run. However, Meagan still has a chance for a buzzer. She’s made it into the Semi-Finals by placing third on the women’s leaderboard.

Read on for Meagan’s thoughts on returning for season 12. And enjoy the spontaneous interruption by fellow Ninja Jeri D’Aurelio.

“I was really excited to be out here. Happy to be healthy! Definitely would have liked more obstacle specific training in this. This course was a little stressful. I knew I needed to move quickly and that kind of made me rush it a bit at the end, which was a mistake. It’s always hard when you can’t execute exactly how you want,” Meagan shared.

“I also have never had to push it that fast on a course. Usually, that’s not the case and you can kind of take your time. Knowing what everyone else had done, I knew I had to keep going. That was new for me. It was going great until I just didn’t get all the way around on one of the Sideways things. My back hand didn’t get all the way over. A minor mistake, but that’s why it flipped.”

I’m so excited to introduce y’all to my teammates @ninja_nye and @volkswagen.warrior!!! As I’m sure you’ve already noticed that @ninjawarrior is a little different this season due to COVID restrictions. Having teammates was a great way for all of us to have a support system on set. They are both very talented ninjas and I had such a blast with these two ☺️ !!! • This will be @ninja_nye (aka Alex Nye’s) second season competing. He competed two years ago in Season 10, but due to an ankle injury, he had to sit season 11 out. Alex is an award winning photographer as well as a federally certified drone pilot! He loves incorporating his active lifestyle in everything he does and has created a pretty amazing ninja training set up at his home in San Diego, CA. • @volkswagen.warrior (aka Calli Spradlin) will be competing in her rookie season. I first met Calli a few years ago @ninjaintensity in Castle Rock, CO where she works and I remember immediately noticing her witty sense of humor along with her natural talent for ninja! Then she told me about her awesome 1971 VW van that she restored with her dad, which made me get overly excited and ask her 1,000 questions! After high school graduation, Calli accomplished her goal of taking a solo road trip in her 1981 VW Vanagon! • I’m so excited to be back for my 7th season and I’m so honored to be the captain of this team. It’s going to be a great season, and I’m just so thankful that season 12 was able to happen! This has been a year of obstacles for the whole world, but together, we can get through it ❤️!!! • The air date has been moved! Tune in Monday 10/5 at 9pm EST/ 8pm CST!!! The so

Jeri crashed the interview at this point. Jeri was bumped off the leaderboard by Meagan’s run. Meagan had known that she’d need to bump Jeri to advance, but the best friends were much more interested in discussing techniques rather than dwelling on placements. Both fell at the same point on the course, but they were excited to celebrate the bright moments.

“We both nailed the balance!” Meagan laughed. “I wouldn’t think of us as being balance goddesses, but I think we’re actually really good at balance. This is Jeri. One of my best friends. We did the same thing!”

“I do still have life in this season, so I’m going to CALM DOWN and stop being so stressed. My mind gets to me sometimes. I’m going to try to relax a little bit.”

In honor of the premier of @ninjawarrior here’s a fun little training sequence! I personally love the challenge of catching the spinning bar after the cliffhanger! Remember to tune in tonight for the first qualifier episode at 8/7c!!! by @thebriankretsch

We’ll see Meagan’s next run when she returns for the Semi-Finals, which kick off next week!